History of the Bounty

Mutiny on the Bounty 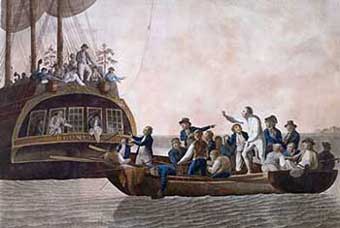 In December of 1787 a small ship set sail from Spithead on the south coast of England for the south seas. Its mission was to collect breadfruit plants from Tahiti and transport them to Jamaica. It was captained by Lieutenant William Bligh who was an expert sailor, having served under Captain Cook. The voyage lasted 10 months after adverse weather conditions meant they failed to round Cape Horn and had to go the long way round Africa.The delay meant that they ended up staying in Tahiti for 6 months, during which time the officers and crew grew more enamoured with the local customs and especially the liberal sexual attitudes of the native women. Some, like Fletcher Christian, even took wives as they grew reluctant to leave. Attempting to control the situation, Bligh was increasingly forced to punish his men and floggings became more routine as Bligh and Christian's relationship continued to break down. 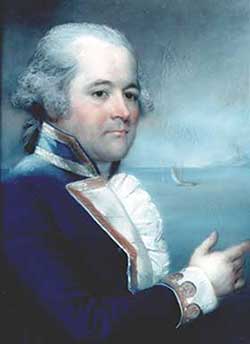 On April 4, 1789, Bounty departed Tahiti, much to the crew's displeasure and on the night of April 28, Christian and 18 of the crew surprised and bound Bligh in his cabin. Dragging him on deck, Christian bloodlessly took control of the ship despite the fact that the most of the crew (22) sided with the captain. Bligh and 18 loyalists were forced over the side into a small life-boat and given a sextant, four cutlasses, and several days food and water. Bligh was being sent to almost certain death, dangerously overloaded and lacking charts, and he even lost one man to hostile savages on a nearby island. But against all the odds Bligh succeeded in sailing the life-boat 3,618 miles to Timor in the Dutch East Indies after a 47-day voyage. It was a feat of skill, leadership and endurance without equal even to this day.

Meanwhile the Bounty sailed back to Tahiti where, twelve of the mutineers and the four loyalists were put ashore. Knowing they would be hanged if ever found, Christian and 8 mutineers picked up six Tahitian men, and eleven women and sailed on in search of an island so remote that they would be safe from the British Navy.

On January 15, 1790, Christian re-discovered uninhabited Pitcairn Island which had been misplaced on British charts. To reduce their chances of discovery, they burned Bounty on January 23. Relations between the Britons and Tahitians soon collapsed leading to fighting until eventually on John Adams remained with 10 women and 23 children.

Aftermath of the Mutiny on the Bounty 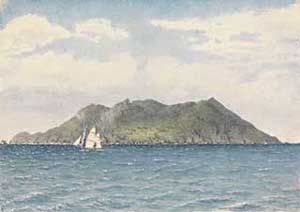 The Royal Navy actively sought to capture and punish the mutineers. In November 1790, HMS Pandora was sent to search for Bounty. Reaching Tahiti on March 23, 1791, Captain Edward Edwards found fourteen men, a mix of mutineers and loyalists, who were placed in a cell on the ship's deck known as "Pandora's Box." While passing through the Torres Strait on August 29, Pandora ran aground and sank the next day. Of those on board, 31 crew and four of the prisoners were lost. The ten surviving prisoners were court-martialed. Four of the ten were found innocent with Bligh's backing while the other six were found guilty. Two, Heywood and James Morrison, were pardoned, while another escaped on a technicality. The remaining three were hung aboard HMS Brunswick (74) on October 29, 1792.

A second breadfruit expedition departed Britain in August 1791. Again led by Bligh, this group successfully delivered breadfruit to the Caribbean but the experiment proved a failure when the slaves refused to eat it. On the far side of the world, Royal Navy ships relocated Pitcairn Island in 1814. Making contact with those ashore, they reported the final details of Bounty to the Admiralty. In 1825, Adams, the lone surviving mutineer, was granted amnesty...and their descendants remain there today.